Duncan MacLachlan, Chair of ACHS says “We are delighted that our scheme has been recognised in this way. Along with Luss Estates and a number of local people from The Arrochar & Tarbet and Luss & Arden Development Trusts, Energy4All, Local Energy Scotland and a Hydro consultant, Gregor Cameron, all worked hard over a number of years to develop this project.

“The scheme was one originally looked at by Luss Estates, but not proceeded with as it was felt to be too small to be viable as a commercial venture. Subsequently, the Estate was approached to lease the land to the community at a peppercorn rent, to enable the project to go ahead as a community-owned scheme, and was delighted to be able to do this. Luss Estates is proud to play a small part in helping Scotland achieve its target of 100% renewable generation by 2020, and specifically the target of 500MW of community and locally-owned renewable energy by 2020.”

The project benefits the local community in many ways.  Local residents and those from further afield, including our school children are able to visit the site educating the next generation about the benefits of renewable energy.

We are generating clean, green electricity and we are half way towards the annual 400,000 kWh energy generation target with more winter months to come. 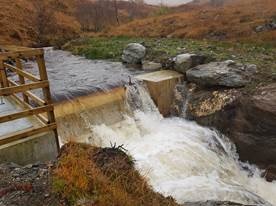 The profits from the project are shared on an equal basis between the two Development Trusts. The Trusts aim to improve the quality of life for residents, especially the young and the elderly within their rural locations.  A priority for both Trusts is operating and maintaining community hall facilities that provide a social, cultural, recreational and educational hub for residents.”

The winners of the Scottish Green Energy Awards will be announced on the 6th December 2018.

Saturday 24th October 2020 saw a major milestone for the Arrochar Community Hydro Scheme. We’re very pleased to announce that the scheme has now surpassed 1,000,000 KWh (or 1 GWh)!  To give that some context, 1 GWh is sufficient to …